Oh, George! Where Fore Art Thou?

Now that I live 20 minutes away from the Family History Library in Salt Lake City, Utah, my research will be easier and all my brick walls will come tumbling down, right?  ah...no!  I still can't find my great grandfather, George David Roberts, or his family on the 1860 U.S. Census for White County, Tennesse...or ANY county in Tennessee...or ANYWHERE in the United States!

In 1850, McMinn County, Tennessee, a George Roberts is listed with his parents, William and Harriet (Owens) Roberts and brother James.  I am fairly certain this is my George.

In 1870, George is listed with his wife, Susannah (Sparkman) and her children, John Stipe and Mary Stipe in White County, Tennessee.  I KNOW this is my George.

But WHERE was he hiding in 1860 when the census taker came knocking on his door?  He would have been about 10 at the time.  Could he be hiding in plain sight with a horribly misspelled last name?  Could he have been living with relatives, since it was around the time that his mother died?  Could his family be listed in a census substitue for McMinn, White, Van Buren or surrounding counties?

These are the questions that keep me awake at night.. planning my NEXT trip to the Family History Library.
Posted by Unknown at 1:13 PM No comments:

Last night I had the honor of attending the Utah Genealogical Association - Jordan River Initial Chapter Meeting at the Riverton FamilySearch Library in Riverton, Utah.  Being new to Utah, it was a great way for me to meet other genealogists in the area.  It is five minutes from my house and I couldn't think of any else I would rather do on a Thursday night.

The guest speaker was Barry J. Ewell, who spoke on "Cut 10 Years Off Your Learning Curve."  He told us that we should focus on seeing our ancestors in the times and seasons in which they lived.  Barry was very informative and gave me ideas for expanding my own research.  I only wish I had met him 10 years ago!  A .pdf of his presentation is available by emailing Barry at bj57barry@msn.com and mentioning UGA Sep 2011 in the subject line.

Michael E. Burt, the Jordan River Chapter President, also gave us a tour of the library and meeting rooms.  The building was built by Intel and it is definitely state of the art.

The Jordan River Chapter will meet on the first Thursday of the month, except December, at 7 p.m. at the Riverton FamilySearch Library in Riverton, Utah.

I hope to see you there!
Posted by Unknown at 1:24 PM No comments:

My Migration from Florida to Utah

In May, I attended the NGS 2011 Family History Conference in Charleston, South Carolina with my good friend Rhonda.  I truly enjoyed all the sessions...Elizabeth Shown Mills...Thomas Jones and ALL the vendors!  I can't describe the feeling of walking into the conference hall and being in the presence of so many genealogically obsessed people like me!  I felt like I belonged.

In June, my dear husband found a new job...in Salt Lake City! (The sky opened up and angels were singing!) See...miracles DO happen.

In July, we moved from Florida to Utah, sadly leaving our family behind.

On August 19th & 20th, with the unpacking almost done, I took a break to attend the 2011 Utah Genealogical Association Summer Family History Conference in Sandy, Utah at the Salt Lake Community College...two days of fabulous speakers presenting informative classes on my favorite subject!  At the end on the conference, the vendors and organizers gave away many prizes, including two computers!  It was a really great value for only $20.

I have to give special kudos to Leland Meitzler, who's class on  State Censuses and Census Substitution was so rudely interrupted by a computer glitch!  But Leland, being the professional that he is, maintained his composure and continued on to enlighten us with his vast knowledge of the subject.

Now that I have relocated my Ancestors to a DIFFERENT Attic, it is time for me to begin my job search.  I am hoping that since I am now located at "ground zero" for genealogical research, I will be able to put my passion for genealogy to good use.  I love nothing more than solving a puzzle or finding the missing link and now I am in the perfect place to do just that.

Ah, Tennessee...steep, tree covered mountains with hairpin turns causing us to pull over more times than I care to remember.  Places with names like "Big Bottom", Butt's Bridge, Caney Fork River. Doyle. Sparta. Guy Mountain.  I was little in the 1960's.  Too little and car sick to take notes or ask questions.  But I have my memories;  Being cautioned not to hug grandma's neck to tight for fear that I might break it.  Grandpa, missing two fingers on his left hand from a sawmill accident as a young man, now entertaining the grandchildren by using the remaining thumb and fingers to imitate a "little old man chewing tobacco."  The blue veins in Grandma's hands visible under her crinkly, paper thin skin.

Mary Alvira McCormack was the daughter of Joseph McCormack and Nancy Alsada Dodson.  William Smith Roberts was the son of George David Roberts, Sr. and Susannah Elizabeth Sparkman, the widow of George W. Stipe.  William's siblings were John and Mary Stipe from Susannah's previous marriage and George David Roberts, Jr., Thomas B., Fannie Lee, and Emmett G. Roberts.  George and Susannah's marriage suffered a slight detour in 1871.  While shooting an intruder, Thomas Dodson, who was making advances on his wife, George shot the intruder's nose off, thus maiming him.  If the intruder had been killed, it would have been self defense, but since he was merely maimed, George David Roberts, Sr. was charged with malicious shooting and severed two years in Nashville at the Tennessee State Prison.

George David Roberts, Sr.'s birth is a mystery to Roberts researchers.  He is thought to be born on 04 Mar 1850 or 1851 to William Roberts and Harriet Owens of McMinn County, Tennessee. He had fiery red hair and bright blue eyes.  He is believed to have siblings named Dock D. Roberts, Bart Roberts, Sarah Elizabeth "Sallie" Roberts, and possibly James and Samuel Roberts who lived in White County and Van Buren County in Tennessee. There is no record of them on the 1860 census in any county in Tennessee, but they are all listed on the 1870 census.

In Roberts family stories told by George David Roberts, Sr. to son William Smith Roberts and written down by my cousin, Marilyn Denman Eaton, George related how his father served in the Civil War and that his mother died during that time, so his father had to take leave to go home and bury his wife and find someone to take care of his children.  He married a woman who was greatly dislike by the children and was referred to as "The Old Heifer".  She forced George to "swim the Tennessee River to get her a plug of chewing tobacco while he was suffering from measles or chickenpox."  George said would lie in bed at night and he could hear the cannons being fired at the Battle of Stones River, knowing that his father was fighting there. 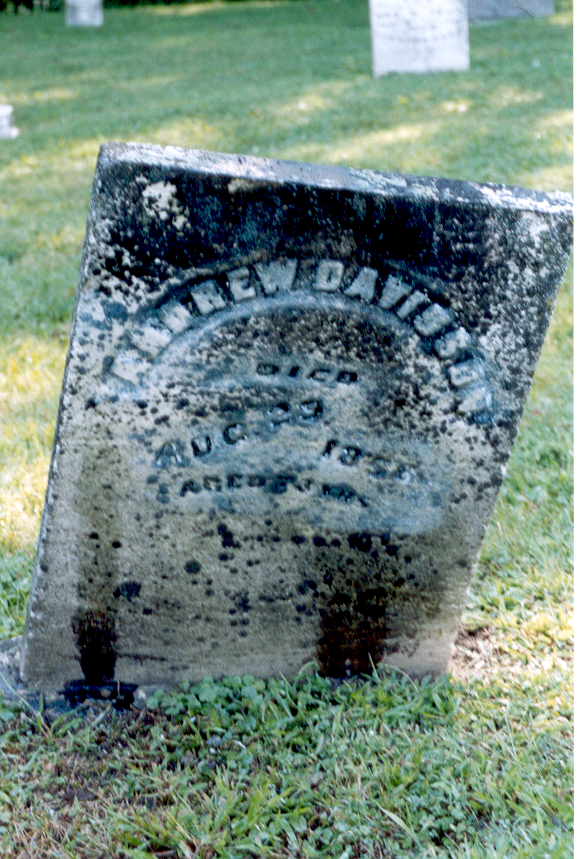 The search continues for the identity of the father of my maternal great great great grandfather,   Andrew Davisson.  Andrew lived in Harrison County, Virginia (now West Virginia), where the Davisson name is very common.  In fact, every Davisson family seemed to have a son named Andrew.  His headstone in Hancock County, Indiana, gives his date of birth as 1785, but, as of this writing, no documentation has been located to confirm that date.

Here are the facts in a nutshell:

• On 28 June 1821, Andrew Davisson was joined in the Holy State of Matrimony to Sarah Wilkinson, daughter of Charity Stout and Nathan Wilkinson. The marriage was solemnized by A.C. Holden, Minister of the Gospel, in the Simpsons Creek area of Bridgeport, Harrison County, Virginia. They had four children, Franklin, b. 1822, Nathan, b. 1828, Mary, b. 1830, and William Eldon Davisson, b. 1832.

• In the fall of 1834, Andrew loaded up his wife and kids and headed to Harrison Township, Henry County, Indiana, where he purchased land in 1839.

• Andrew Davisson’s will was probated in 1859, and in the codicil he mentions his “other children”: Abigail Davidson, wife of Charles Posten, Abner Davidson, and Benjamin C. Davidson. They had also been living in Clinton County, Iowa, but had preceded Andrew in death. Andrew apparently had one or two previous wives.